Leaders and members across the National Black Foot Soldier Network have launched a nationwide discussion on the racial karmic retribution the white man has opened himself up to because of his kind’s unrestituted for atrocities against the world’s people of color. 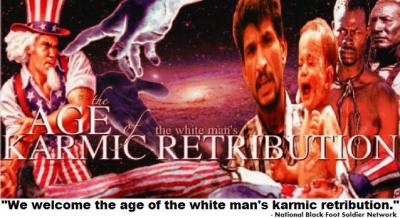 “That these filthy creatures who call themselves humans that are white could and do think they are above the universal laws of nature, God and karma bespeaks the psychological sickness that is now inherent in them because of their unwillingness to change,” says Chesterfield County Black Foot Soldier Hampton McKenny. (Source)
“The white man has broken each of the Universe’s Divine Laws, grossly violated the human rights of all the non-white citizens of the earth and without regard plundered the earth herself in selfish exploitation of her resources.As such, we must welcome this: the emergence of the universal age of the white man’s karmic retribution,” says NBFSN Divine Karma interpreter Hallowed Yclept. “We know now that when any atrocity befalls anywhite person at the hands of any person of color it is in accordance with the edict and bounty the universe has issued against them for their Universal Law violations, failure to make restitution for their racial crimes and crimes against the planet.” (Source)
(Developing…)

Is there any argument whites won’t present to excuse themselves from the reparations they owe for atrocities of their country and fathers committed against us?

The National Legal and Policy Center’s “The Case Against Slave Reparations” By Peter Flaherty and John Carlisle exemplifies the reason to pose the question asked above. Below we look at what’s suppose to be it’s 6 “most powerful” points and easily dismantle them:

One estimate puts the total cost of reparations for the African American descendants of slaves at $97 trillion.

The charge that America has never paid for slavery ignores the 618,000 Americans who died in the Civil War.

The Civil War wasn’t fought to “free the slaves.” It was fought to “Preserve the Union.” See the quote by Racial Terrorist Abraham Lincoln below:

“I will say then that I am not, nor ever have been in favor of bringing about in anyway the social and political equality of the white and black races – that I am not nor ever have been in favor of making voters or jurors of negroes, nor of qualifying them to hold office, nor to intermarry with white people; and I will say in addition to this that there is a physical difference between the white and black races which I believe will forever forbid the two races living together on terms of social and political equality. And inasmuch as they cannot so live, while they do remain together there must be the position of superior and inferior, and I as much as any other man am in favor of having the superior position assigned to the white race. I say upon this occasion I do not perceive that because the white man is to have the superior position the negro should be denied everything.” (Link)

In America’s colonial era, half of all the white immigrants arrived under some form of involuntary labor.

American history documents the Colonial Era as being from 1500 to 1754. The Emancipation Proclamation, which was not declared to free the slaves, wasn’t passed until 1863 (1865 Texas). The whites who migrated here during this era were not only placed in the higher caste system the institution of slavery created, they also enjoyed the vast number of economic and psychological advantages it created. Those who invested in it, by opening businesses, were able to capitalize from it. Caucasians who migrated to America in the colonial era increased the overall population
and, therefore, the labor and burden on the millions of blacks who were being terrorized by Chattel slavery. They are just as guilty as the whites who came here as a result of Columbus’ misvoyage.

National Black Foot Soldier Network: “Interrupt A Devil’s Life For Reparations Campaign 2011” “ALL WHITES R REPARATIONS OFFENDERS AND, WHETHER AT WORK, ON THE STREET OR AT HOME, SHOULD BE QUESTIONED ABOUT  THEIR READINESS TO RELINQUISH OUR POSSESSIONS TO US.”

At the height of the slave trade around 1800, there were nearly as many slaves within Africa, 2.5 million, as the number of slaves in the Americas, 2.9 million.

Joseph Arthur Comte de Gobineau, a white man, is considered the father of racism. Slavery existed before the Trans Atlantic Slave Trade. But, in the recorded history of the world, never had the abusive form of Chattel Slavery whites inflicted on blacks been recorded. IOW, nowhere (in recorded history) had slaves been stripped of their humanity. Because of the unique kind of savagery whites inflicted, historians began to refer to it (the Trans Atlantic Slave Trade) as The Peculiar Institution i.e. “peculiar from the forms of slavery previously known to man”.

In summary and additionally: 1. There was no system of Chattel Slavery in Africa. Slaves were not stripped of their humanity i.e. culture, religion, humanity; 2. What Africans did to Africans, which was by in no way comparable to what whites did to them; 3. Despite the current European historical revision, the percentage of Africans sold by Africans in insignificant when compared against the numbers who were stolen.

The vast majority of Americans today are descended from immigrants who came to America after slavery was abolished in 1865.

There is no comparrison between “white indentured servants” and the blacks of the Trans Atlantic Slave Trade. It is an erroneous comparrison.

Unlike reparations paid to Holocaust survivors, slavery reparations would not go to the actual victims.

America supported and fought for the so called “Jewish Holocaust survivors” of Hitler’s so called campaign against them. Thus, America believed reparations for those self styled Jews was owed. Not only was America active in seeing the suspect offenders of the alleged crimes make restitution to them, the country played the most significant role in stealing the land upon which the illegitimate state of Israel now resides. America’s position with our people was and continues to be grossly different. While the country wasn’t responsible for the alleged crimes done to the so called Jews of the afore mentioned illegitimate state of Israel, she fought for them to receive reparations and was instrumental in the attempt to build and establish (for them) a nation.

For the millions of blacks, who are actually the true and original Jews, she (America) did savagely and brutally oppress, post the Emancipation Proclamation, her government and her citizens engaged in a most often open duplicitous and sometimes conspiratorial process to deny our ancestors reparations and keep them relegated in an underclass position.

The post Emancipation Proclamation gave birth to not only a racist Prison system that most often found blacks guilty of any accused crime – regardles of evidence, but overtly terrorist birth of the Klu Klux Klan also formed. From 1896 to 1954 (the era of Plessy VS Fergerson to Brown VS Board of Education), America openly institutionalized the system of Separate But Equal that deliberately subjagated our people to less than 2nd class citizen positions. The post era of slavery wasn’t condusive to the fight for reparations.

It took some real losers to string this set of poor arguments together and attempt to pass them off as justifications as why we aren’t owed reparations. I can’t imagine better losers than the NLPC co-founders Flaherty and Carlisle to have undertaken the effort. They should have “loser” stamped on their foreheads.